Below is the trailer to an important film. "The film is the product of a unique collaboration with visitors to the Digital Nation Web site, who for the past year have been able to react to the work in progress and post their own stories online." The film is available online and will also be aired Feb 2nd. From the press release:


In Digital Nation: Life on the Virtual Frontier, airing Tuesday, Feb. 2, from 9 to 10:30 P.M. ET on PBS (check local listings), FRONTLINE presents an in-depth exploration of what it means to be human in a 21st-century digital world. Continuing a line of investigation she began with the 2008 FRONTLINE report Growing Up Online, award-winning producer Rachel Dretzin embarks on a journey to understand the implications of living in a world consumed by technology and the impact that this constant connectivity may have on future generations.


The full press release is worth reading. I know there are challenges; technology can consume us and we must find balance. The film addresses the topic of schools and institutions of higher education using technology for learning. Parents and educators are challenged to keep children safe and to find ways to utilize technologies that are truly beneficial. Many believe those challenges must be addressed because there is so much potential for learning about ourselves and our world.

It's obvious to educators that technology is transforming us and the way we learn. There is little doubt that technology can and should be used to further learning in schools and in institutions of higher education (how, is less known). This post by a UK educator is an example of how easily children adopt and benefit from new technologies "What happens when you give a class of 8 year old children an iPod touch each?" And this post by Abby, a 4th grader, who recently posted on pandas, which her father, an educator himself, tweeted about to share. They were pleasantly surprised as comments from around the world were submitted on her blog.

Can you imagine children like Abby and the 8-year-olds in the UK post video and others like them in high-school or college? Will sitting and listening to lectures, writing papers and taking tests meet their expectation for learning? They are already creators of content, they are participators in a globally connected world. Can our education system build on that? Would society benefit if it did?

As an academic librarian I believe it's important that institutions of higher education understand that most college/university students of the near future will have grown up immersed in technology. And though there are challenges, the expectation for learning with these tools should be understood and technologies utilized when and where appropriate. I'm hopeful this program will help us understand the pros and cons of this digital revolution so we can better prepare. Again, one can view the program online here.

Update 3/2010: I'm including a link to a blog post that many feel is a fair criticism of the Digital Nation program speaking primarily to the segment on Second Life.

Lastly, a twitter buddy, @raymondpirouz, wrote a short blog post and alerted me to a response video by educators who felt that "Digital Nation" left out much of the incredible work related to education in Second Life. I agree (fairly typical of SL media reports) and am embedding the short response video below.

I've been wanting to write a post that looks back on some of the technologies I've been following and involved with the past year. This week my university's CIO, Greg Smith, sent out this invitation to a Google Wave:


New Technology for Higher Education:
I am starting a new Wave to gain feedback for my upcoming Lunch & Learn presentation on what is new in Technology. A side benefit of this Wave will be to give a quick glimpse of what Google Wave is. So please respond with your short lists of what you think is important or innovative Technology in Higher Education.

I figured this would work for both purposes. I enjoyed participating in that Wave (seemed a good practical use of Wave) and was hoping to easily embed that in my blog but alas Google Wave, which I think has great potential, is still in the early stages of development. The options for embedding into this blog are not currently very simple, instead I will copy and paste what I wrote, including my short intro, and redo the links and embeded videos below:

Remember I'm not a techie, just an early adopter (and a librarian) who often finds herself in over her head. Also Greg, you state to list what we think is "important or innovative," you didn't state necessarily practical or useful at the moment. Since I tend to feel most passionate about newer technologies that may or may not make it into the mainstream, I'll focus some on those as well (don't worry, I'll leave the really "out there" things out for now).

* ebooks (we've been purchasing and leasing thousands at the GFU library)
* eReaders and, more importantly, ebook reading software for any/every device
* mobile (handheld device) access to everything
* video, video, and more video! And streaming live video like Ustream, Mogulus, etc.
* screencasts
* google apps and all things google
* web-based everything
* our work is in the cloud
* digital repositories
* open access, open source, open education, open content of all kinds
* social networks of all kinds (though these have been around a long time, there are new networks being created regularly and older networks are still evolving. It does appear facebook is used most in higher ed but seems to me more for social purposes than educational. The social network that has been most impactful for me is twitter, though like many things, it's all in how you use the tool.)

Past innovations I use regularly (some considered mainstream and some still not and maybe never will be but still quite useful to me):

The Future (some near, some not too soon and some maybe never :) )

* augmented reality (AR) (already happening but more useful educational application still to come).
Here's a concept video I like on this:


* augmented reality and handheld devices - here's a blog post I wrote on that with several video examples (back before Apple allowed AR apps on their devices, many more avail. now) titled, "Augmented Reality and Handheld Devices-Finally Ready for Mainstream?"
* QR Codes - I believe QR (quick response) codes will soon take off in the USA though they've had a slow start. (Look for QR codes in the library this summer. Here's a photo of a QR code I generated for use in the library to give an idea of just one way these codes can be used (there are many amazing ways, really). This short video on google favorite places shows another use.
* Mixed reality
* browser based virtual worlds for adults (happening now but just barely)
* immersive learning environments of all kinds
* gesture recognition systems (some like project natal below will work on handhelds like Xbox 360)
* project natal (be sure to meet milo if you haven't already)

* And something and someone to watch as this sort of technology if/when developed could turn everything upside down:


All for now but much more to come because we're in the midst of a digital revolution! Exciting times :)
Posted by Robin Ashford at 1:16 PM 1 comments 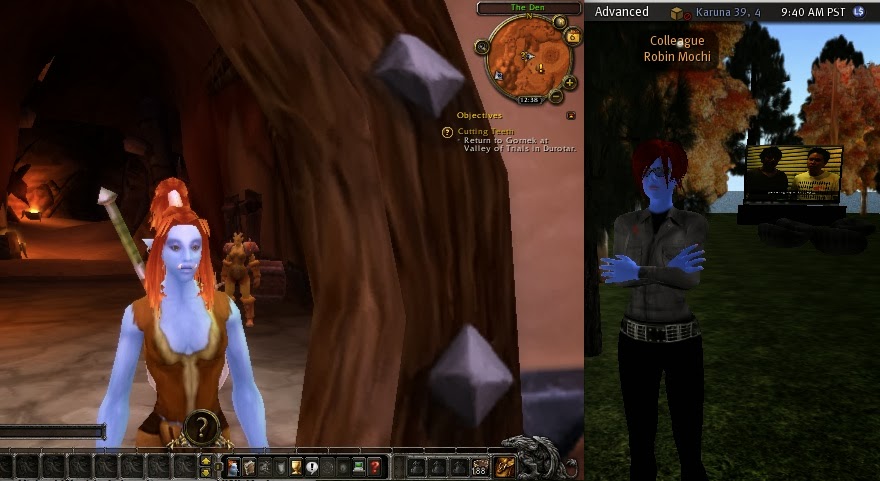 Very interesting morning learning World of Warcraft. Had to leave WoW to work my reference desk shift in the Karuna Resource Center in Second Life (SL) in my position as Consumer Health Librarian. I spent a few minutes in both simultaneously and that's what this screenshot shows (shocked it didn't crash my computer to run both).
Also posted a screenshot of my first hour in WoW on flickr

The following explains a little about what I'm doing & why:
A bit of an experiment - was asked by a faculty member teaching at UCSD to assist with a research component for his course being taught primarily in WoW with some parts in SL. As an academic librarian working in SL, how could I say no?

So as in SL, I am a blue female in WoW (albeit a troll). Should be interesting comparing these two environments. I have a fair amount of experience teaching and learning in SL for my university and have been involved and following educational developments in SL, including the work and roles of librarians, for some time. I'm interested in learning how the WoW environment is being used for educational purposes. And of course, where does the librarian fit when courses are being taught in these environments. What is our role? More to come as I explore and learn in WOW.
Update: Jan. 9, 2009 -
I'm only at the beginning of my research on WoW but for anyone wondering about educational applications, I recently found a blog by an Open University faculty member, titled, E1n1verse – WoW, Learning, and Teaching by Michelle A. Hoyle. I especially enjoyed reading this post on why she plays World of Warcraft and the excellent references and links she included.

Final Update-Jan 22, 2010: Great group of students in the ICAM 120 Course, I enjoyed presenting on grant writing tips and researching a few articles for them. I observed one of their three hour-long classes and found it pretty fascinating. We all started in SL with introductions and then my presentation then took a short break and afterwards the instructor facilitated an interesting discussion on their reading for that week, Jean Baudrillard's Simulacra and Simulations. After the discussion everyone headed over to WoW. A lot accomplished in one class really especially since some had never been in SL before and a few were also new to WoW. Here are a couple of snapshots I put up on flickr.

World of Warcraft is something I would be interested in investigating further if I had more time. I just don't at the moment so unfortunately I can not continue on with the group. Even though I was only in WoW four times, I think I understand why some in higher education are using this platform with their students. I also think you would need creative faculty advanced in using the program to be successful. UCSD has a talented faculty member teaching this course in James Morgan. I was impressed with the level of engagement and discourse he managed with a class of 18 students participating in this adventure. I expect they will learn a great deal.

Another little nugget I learned about was something we all used for voice called Ventrilo(kind of like Skype but more stable with larger groups), it worked very well and really helped make the process between SL and WoW more seamless.