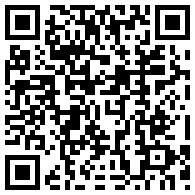 QR Codes are appearing more frequently in the U.S., though the technology is still largely unknown to the majority and mainstream adoption will take time. Recent developments are raising awareness of QR codes in the country (UPDATE 7/29 more major QR code exposure), and librarians in libraries everywhere are busy experimenting, learning from each other and sharing results.

I created  an introductory flier to share with students and faculty as we continue to research and brainstorm ways to utilize QR codes in the library and on campus.

The Portland Center of my university, where I work as a reference librarian, serves primarily graduate and doctoral students. They are busy adults, many with families working full-time jobs while attending graduate school. Any new technology that is introduced must have enough value to warrant their time and effort. Because QR Code technology is very simple to use, I think there is a good chance of seeing this technology utilized IF doing so makes their lives easier (i.e., QR codes on study room doors to take users directly to the room reservation online form can save time and effort). The main undergraduate campus library has also introduced QR codes and it will be interesting to observe usage between the different groups.

The Journal of Information Literacy recently published an article by Andrew Walsh titled, "QR Codes – using mobile phones to deliver library instruction and help at the point of need." From the Abstract:


This article outlines the practical uses we have found for QR codes, gives preliminary results of how those have been received by our library users in our pilot study and highlights the reluctance of many students to engage with this technology, which may need further investigation.

It's a worthwhile read from which we can learn a great deal, but keep in mind the research was done close to a year ago and there have been significant changes since that time. Many of the same challenges exist today, especially in the U.S. where we are lagging in the use of QR codes and other mobile technologies. However, awareness of QR codes is growing in the US, and QR code technology has developed greatly the last few months in both quantity and quality of apps. I've personally culled a number of apps as better apps have been made available (no longer is taking a picture necessary on some devices as newer apps quickly and accurately scan the codes).

The author also mentions that QR codes are "an easier alternative to full augmented reality," and I agree. However, augmented reality is another technology that has seen significant development over the past few months. I've been experimenting with augmented reality (AR) apps, which I hope to utilize for library tours and other purposes (blog post to come - done and here). At the moment (until the next new technology) I feel that both QR codes and AR will have a place in the library and the university. This post on augmented reality and handheld devices from a year ago highlights the different amazing apps at that time and I expect to continue to see gains in AR and QR code development.

Lastly, this past Friday I discovered (via a tweet to a flickr screen shot) that Alexander Street Press (ASP) had made QR codes available in their Music Online database. I immediately logged into our subscription database, picked an album, found the code, scanned it and was listening to music via a beautiful ASP player on my iPhone 4 in less than two seconds. Below is a screen shot I took to share (with an expired QR code (explanation below), so no legal worries :) ). 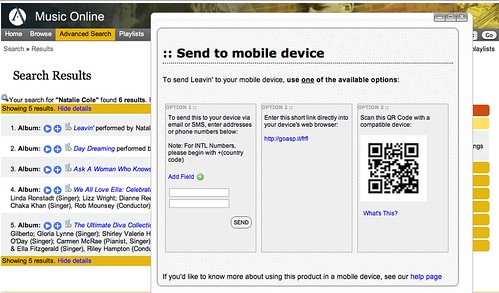 I was in my office on our university's wireless system at the time I had logged-in and assumed the music would stop working on my iPhone once I left the office, but that was not the case. After arriving home, I found that I could still listen to the music on my iPhone and at that point I was perplexed as this music was from a subscription database. I continued to experiment with the music database QR codes throughout the weekend.

On Sunday I was searching for information on how the Music Online codes worked when I came upon this Library Journal post"Alexander Street Press, Mobile Streaming Audio, and QR Codes" The article explains that a specific collection of music was being made freely available to all until August 15h. However, the music I chose was not from the free collection and though the article was indeed great exciting news, it did not answer my questions on how/why I could access the subscription databases on my phone without being logged in.

After further searching I found this Alexander Street Press link to a page titled "Using Your Mobile Device" from their Music Online database. Included here is the statement "Mobile shortlinks (used to create the QR code) allow you to listen even when outside of institution network, allowing you to listen from your own home. Please note that shortlinks cannot be used outside of your institution network after 48 hours, but will still be usable within it." I verified today that all the links to music I had bookmarked on my iPhone on Friday have indeed expired. I was also able to easily login as a remote user from my home yesterday and once again added a number of album selections to my IPhone.

I'm very pleased and believe that what Alexander Street Press has done with Music Online and QR codes is the type of development that will drive mainstream adoption in libraries. I'm looking forward to what publishers and database vendors and others (including librarians!) will be doing to help make using library content on the go even more feasible and exciting.

How is your library using QR codes? Comments are welcome.

BTW - The QR Code generator I've been using is Kaywa and my current favorite free QR code reader app for iPhone, iPod Touch, Android devices and many more is the i-nigma reader.
Posted by Robin Ashford at 12:46 PM 2 comments