Why I Want An iPad Anyway 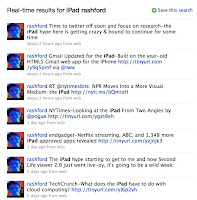 I was both excited and disappointed when I watched the Steve Jobs iPad demonstration along with zillions of others via live blogs and tweets. I thought they were mistaken when I first heard "no flash" and then "no camera" on a live blog. I tweeted "no flash, did I understand that correctly?" and several others said they were sure that couldn't be and were trying to confirm.

It didn't take long to figure out this gorgeous device was primarily for consuming content. As an educator I found this especially disturbing. Surely everyone knows we're a participatory culture now (no, not everyone, actually) - how will we upload our videos to YouTube?!

Since then I've followed the iPad hype on twitter, read many articles and blog posts, and watched plenty of videos about the iPad and iPad content. People are definitely passionate about this device. Some reviews have been critical, others say it's going to change the world.

After stepping back from my self and my personal technology habits, I'm in the camp that this device will be a game changer. I see it as the beginning of a new era. A move from files and folders to apps and the cloud. This makes sense to me as I've had most of my data in the cloud since the first Google Apps existed and I'm a believer. And the Apps! iPhone apps have been blowing my mind lately, I can only imagine the amazing developments to come in new iPad apps within the year.

It's not yet an ideal device for someone like myself, not a techie but an early adopter who likes to create, but a game changer nonetheless.

I'm planning to wait until V2 of the iPad for myself, when I'm pretty sure the camera situation and a few other things will have changed (ability to create and edit google docs please!). I'll have plenty of opportunities to get my hands on iPads before then, and I believe I've convinced my library director to let me pick one up to run e-book tests on very soon. BTW - the iBook demo in the video is nice and I expect there will be some truly innovative apps developed along these lines: iPad iMagineering-Penguin Books-DK Yep, exciting times ahead.
Posted by Robin Ashford at 12:42 PM 1 comments